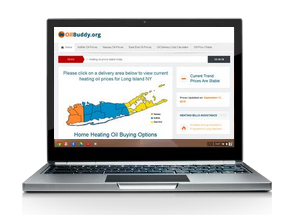 OilBuddy.org is a free service, listing multiple heating oil companies and their price per gallon. Prices on the website are updated daily and buyers can sort them from lowest to highest, thus being able to quickly identify the best deal.

Unlike with contracts where you are locked in to a certain price, COD companies change their prices according to the current market. Oil prices may change every few days or several times throughout one day depending on the market. COD companies typically offer discounted prices and charge significantly less per gallon than full service companies.

According to the 2009-2013 American Community Survey 5-Year Estimates from the Census Bureau around 188,565 households in Nassau County, 272,944 households in Suffolk County and 175,418 households in Queens use fuel oil/kerosene to heat their homes. About half of these households use COD suppliers to purchase heating oil.

“While oil prices are almost half of what they were last year, it’s still important to be able to save on your heating bills,” says the website’s co-founder Lena Schneider. “Our goal is to provide heating oil buyers with the convenience of comparing prices without having to call several different providers. And with oil prices falling, COD deliveries are perfect for buyers who don’t want to be locked in a long-term contract with a single supplier.”

OilBuddy.org was created to help Long Islanders find discounted COD oil prices in their area. The service is free and buyers can identify the best deal on heating oil in a matter of seconds. For more information and to view current prices please visit OilBuddy.org.

According to the 2009-2013 American Community Survey 5-Year Estimates from the Census Bureau around 188,565 households in Nassau County, 272,944 households in Suffolk County and 175,418 households in Queens use fuel oil/kerosene to heat their homes.

For the past few months most of us have been trying to keep cool but just a couple of short months from now we’ll be turning up the heat, and it can get pricey.

Until now natural gas was the cheapest option for home heating, however this could be changing. Oversupply in U.S. and other factors such as OPEC overproducing oil, China's economy and the prospect of Iran rejoining the oil market have slashed oil prices in almost half in the past year.

Last year the average price of oil was around $3.70 per gallon.

Right now prices are almost half from last heating season. Looking at the prices on OilBuddy.org the average price for 100 gallons of heating oil is around $1.90/g.

Oil prices fluctuate and no one can predict what they’ll be in the future but if you act soon, you can save a lot of money for this upcoming heating season.